This high-resolution 3D model of the city includes trees, cars and tiny details that make the simulation much more realistic than simply using maps or building plans.

Pedestrian pathing in City Park - pedestrians take the shortest route to their destination, ignoring the pathways. This shows where paths are serving the needs of pedestrians well, and where people are likely to take shortcuts across the green spaces and flower beds.

Emergency evacuation of University of Tasmania's Stadium - many people need to exit the stadium quickly. They look for their nearest exit and head directly there. This simulation highlights dangerous bottlenecks and narrow exit passageways that could lead to injury in an emergency.

Exiting Royal Park after an event - A large crowd of people want to leave the park and get to their cars after an event ends. Are there sufficient tunnels through the amphitheater seats to allow the crowd to disperse safely?

There are many other applications for simulations running on this fantastic 3D city dataset. I hope this project will encourage other local councils to release their city models as open data. 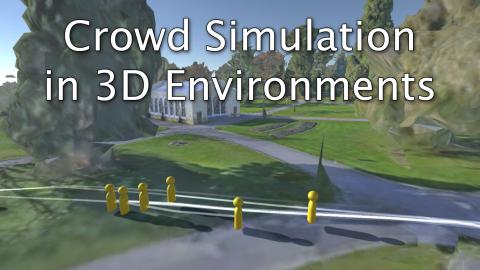