Death Who? is a multiplayer card game where players work both with and against each other to complete milestones from colonial citizens’ lives, aiming ultimately to bring about the end of them, in a game that creates a fun and lightly-competitive way to learn about ways of life in early Tasmania.

To play, each player begins with a small assortment of people, who actually lived here sometime in the early 18-1900s, and a hand of cards from the deck. Each turn a player will play a card to cause either a life event or type of death, affecting both their citizens and those of their opponents. To earn the most points a player must complete each of their citizens’ required life events before they are killed. A premature death will leave their story incomplete and means less points for that citizen, while a citizen still alive at the end of the 10 rounds earns none.

Life events range from the cheerful births, migrations and marriages, to incarceration and transportation for citizens who were more criminally inclined. Causes of death, however, favour the strange, with reports ranging from “visitation from god” and “crushed by tree” to the strangely common “death by misadventure”, highlighting the true dangers of our homeland just a century ago.

We use a vast range of LINC data, and employ a range of research techniques in the design of the game.

What data did we use?

The Death Who? frontend is a game, made with Unity. Code for the game is written in C#, and compiled with the open-source Mono compiler.

Each player takes turns over 10 rounds to complete life and death milestones of the 5 colonial citizens assigned to them.

Starting from the first player, each person will play or discard one card (from their hand of 6) each turn. If they choose to play a life event card, any living citizens who had events matching this will have this objective achieved. A death event card, however, will kill any citizen in the game who died this way, including any belonging to the person who played the card.

This means that while playing cards that represent common causes of death may seem like a good idea to kill more of the opponents’ citizens, players must be careful not to prematurely kill any of their own. However, they must also keep in mind that a citizen’s most important event must occur -- their death, otherwise their other events are worthless.

At the end of ten rounds, a player’s score is tallied from the milestones of their citizens as follows: a citizen who is still alive (not achieved death milestone/event) is worth zero points, regardless of other milestones completed, while a dead citizen is worth points for their death plus each life milestone that was reached before their death

Why is this project special?

Our project is special for a range of reasons, chiefly:

"Those who cannot remember the past are condemned to repeat it." - George Santayana

Death Who (Colonial Edition) is based around concept of exploring history through storytelling, using the medium of a race game to provide the information in a form that is less taxing than the raw data.

Despite their appearance, games are known as an ideal medium for both telling stories and for learning new information. Their very nature is designed around transferring information in an entertaining way.

Games have been shown to provide means of creating and breaking habits, reducing stress levels, and to get people to engage in new topics. The history of people in Australia is long and varied, and we are discovering new information about the history of the country every day, despite this many people are not studying or understanding general history, let alone the history of Australia.

The reasons for this is complex and varied but some of this is due to the nature of history being tied heavily into its artefacts of learning; books, and imagery. While these are both essential they also create a barrier that is hard for people to overcome, there is very little engaging about a book when compared to a TV show or game and while people are reading more than ever, books are becoming less of a part of people's everyday entertainment.

We felt that this is a perfect opportunity for games to fill in the gap, by tying the existing historical data about Australia into a game we created a way to engage with the data in a form that has a low barrier to entry and will provide a better connection to the data than a book ever could.

Due to the time limits, and excellent abundancy of information, we decided to focus on the data sets revolving around early European settlement of Tasmania as an example of the different forms of information Death Who can make available.

The game itself takes the form of a race game, where multiple players are competing against one another and the clock to complete the lives of several early European settlers. Each player has a hand of cards that represent major life events, and their goal is to have as many of their people's life events run to completion before the clock ends or their people die.

Using the Mechanics-Dynamics-Aesethics design framework to guide decisions each element of the game mechanics was crafted to both reinforce the storytelling aspects and to be a direct link back to the people who you are currently playing the game as. All people and events come directly from the historical data, the people who's lives you live out were real people who had these events happen to them.

Storytelling was chosen as the primary aesthetic of the game due to its excellent ability to both improve cognition in the relevant area but also due to its ability to make us feel more empathic with the people and events in the story.

The secondary aesthetics of competition and entertainment give people a motivation, empathy and understanding are powerful but takes time, by having additional more traditional game aesthetics we give people a softer entry into the storytelling.
All of this means not only do we learn more about the events of early European Tasmania but we also gain an empathic understanding of the people who lived in these times.

By playing the game you learn, for example, that more people died by drowning than snakes, but you also gain a connection to these people's lives. Using games and similar tools like Death Who we are ensuring that we will not be those who are condemned to repeat history. 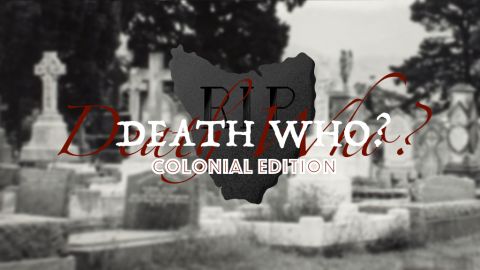