We've heard about the waiting lists, the long commute times and the need to leave work early to 'do the pickup', but does cost have anything to do with it?

In this project we look at the cost of childcare in Melbourne.

We hope to show policymakers and government regulators what factors might make childcare more or less expensive for families.

Knowing the cost drivers can help policymakers determine whether there are levers available to lower the cost of childcare.

We compare cost of childcare per hour to:

We compare average female income to the cost of childcare per hour for each SA3 in Melbourne.

We find there is a relationship between average female income and the cost of childcare.

We have also constructed a variable for household income – however this assumes there is a male and female earner in each household – this is not the case in reality.

With more time, we would track down a better indicator of average household income at the SA3 level.

We test whether greater competition has a bearing on cost by looking at the number of childcare services for each SA3 region.

With more time, we would weight the number of services by population to better reflect competitive pressures.

We test whether a higher rated childcare service attracts a higher cost per hour.

To determine quality ratings at the SA3 level, converted ratings from the Australian Children’s Education & Care Quality Authority to a numerical scale. We then took an average for all postcodes that fell within the SA3 regions of interest.

We find a weak relationship between quality rating and cost per hour.

We lastly plot the cost per hour for each SA3 location on a map. There is no strong relationship between location and cost per hour of childcare at the SA3 level.

Other relevant factors might include - skills shortages and wages of staff, commercial property rents, qualifications of staff, government regulation.

We have visualised our findings using ggplot and Leaflet, hosted in a Shiny application.

Users can select the cost driver from the drop down menu, and the plot will update.

Some screen shots are provided in the zipped folder.

We also prepared a map of all childcare centres in Victoria using QGIS and ArcGIS and experimented with VR.

We use data released by the Department of Employment  which shows the number of children, child care services and cost for each SA3 region in Melbourne.

We join this data with ABS data Estimates of Personal Income for Small Areas which is based on ATO data. This data is available at SA3 level.

We also extracted the "ChildCare"   from "Feature of Interest" dataset  made available by DELWP through data.vic.gov.au

We recognise that there are many family combinations, and ultimately the choice to rear children is a family decision.

Nevertheless, we have focused on females in our analysis, as too often the burden of care falls on women.

This is supported by research that shows that females with dependents have a higher responsiveness to changes in income or prices of childcare than males.

We only look at children between 0-4 years who are in long day care.

We have restricted our analysis to women between the ages of 20-45, which assumes that women outside this age bracket will not have a child between 0-4 years.

Our project could be improved by using Census data to isolate a more accurate population. 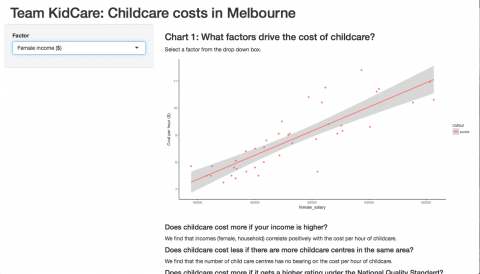