What is Tax? Why Tax Matters?

Before we do something on tax, we should know what is tax? Why the tax matters? Actually, tax is a compulsory contribution to state revenue levied by the government. Our government usually uses taxes to build public facilities and infrastructures such as schools, hospitals, highway and airports, which provide convenience to all of us. Taxes usually can be divided into categories like income tax, sale tax, asset tax, and others.

Exploration of the potential factors of tax

Various open data from Australia Government are utilized for the geovisulisation of these eight variables.

The relationships between tax and these socio-economic potential factors are explored from two aspects:

Predicted distribution of tax in 2030 across Australia

The geospatial distribution of tax in 2030 is predicted using geographically weighted regression model. Results show that the tax will be significantly increased in western regions, and it also will be increased in eastern regions. 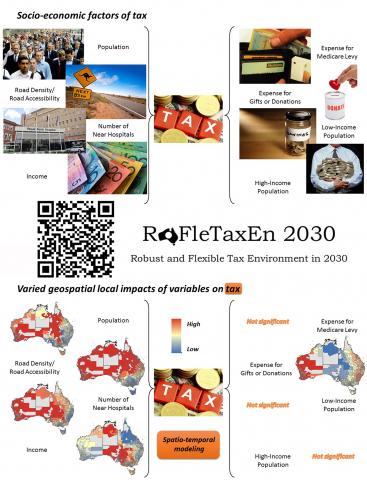