Suburb Outlook is a forecasting tool designed to assist government authorities with making forward-thinking and informed decisions about the future development of the suburbs in a given postcode.

Our goal was to bring together as many datasets as possible from different sources to help visualise the economic and social make-up of a given postcode. We then extrapolated the existing 2006-2015 data to present the outlook of each postcode as it might appear in 2030. Due to the limited timeframe of the GovHack event, we limited our tool to three different and diverse postcodes in South Australia, showcasing a range of socio-economic parameters. The chosen postcodes encompass struggling, emerging, and established areas.

For these data visualisations, we have brought together datasets from:

Suburb Outlook is targeted at the following Awards:

The following tools were used in the creation of the Suburb Outlook proof-of-concept:

The following tools were used in the creation of the promotional video:

The proof-of-concept is limited to data visualisations for three postcodes (5011, 5081 and 5112) located in metropolitan Adelaide. In future, Suburb Outlook could be expanded to include all suburbs in South Australia, as well as in other states providing the same data is available for these states.

The accuracy of the future predictions could be significantly improved by increasing the integration between the available datasets, having access to non-aggregated data and using more sophisticated data analysis tools. 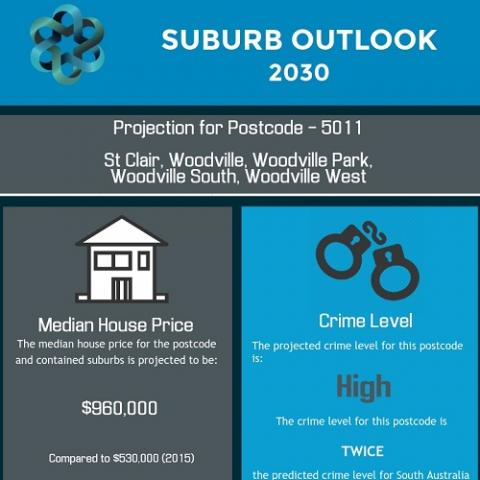